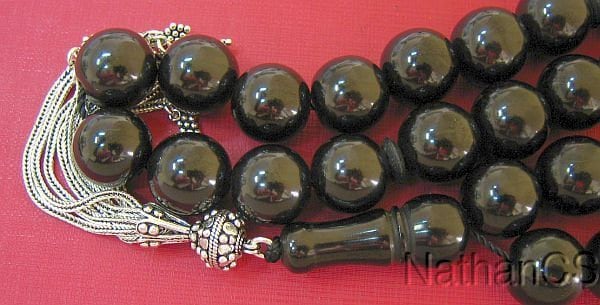 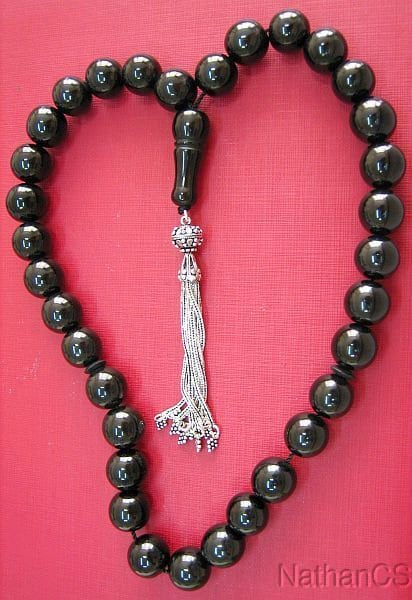 Special from Swancollection : a magnificient strand of Worry beads or Tesbih

It is an extremely pleasant item to use yourself or offer as a gift. It also has a very attractive and at a very reasonable price for such workmanship and type of material.

Pictures describe best and are an intrinsic part of the description

This is a magnificient item that you will greatly enjoy or that would make a fantatstic gift on any occasion.

The city of Erzurum in Eastern Turkey has a specific local black stone (Oltu tasi, Jet) which is carved to produce jewelry, rosary beads, key-chains, pipes and boxes, which you may see while wandering around, especially in Tashan.

Oltu stone, which has been carved in Erzurum since the 18th century, is one of the best examples of semi-precious stones to be found in the world. Oltu is excavated generally around Yasakdag, especially in Dutlu, Hankaskisla, Alatarla and Cataksu villages between the months of March and October. There are approximately 600 oltu quarries. Out of a total of 287 quarries in the Central Dutlu Region, 120 quarries are still being worked.
Jet is obtained from mountainous areas which are dug perpendicularly to the general surface and have galleries 70-80cm in diametre where only two or three miners can work.

Jet is a very compact velvet-black mineral of the nature of coal. Beds of this organic substance are 70-80 cms in thickness. Jet is formed when fossilized trees are subject to diastrophism resulting in folding.

The most attractive characteristic of oltu stone is that it is very soft when excavated and only begins to harden when it is exposed to the air. Therefore, it is very easy to carve this mineral. It generally comes in black, but can also be blackish brown, grey or greenish. When put near gas, this mineral bursts into flames and leaves behind a certain amount of ash. When rubbed, the oltu stone attracts, by way of static electricity, light substances such as dust.

Various ornaments made from oltu are some of the best examples of Turkish aesthetic arts. Oltu stones are mostly used to make ornaments including rings, earings, necklaces, bracelets, tie pins, pipes, studs, cigarette-holders, and prayer beads. It is also used in the electric and electronics industries

My selling principle is : " SATISFACTION OR REFUND " AND IT APPLIES 100 %.
I am ready to refund in totality any item sold by me if you are not fully satisfied with your purchase
NO QUESTIONS ASKED - NO CONDITIONS

I accept Etsy Payment as well as Paypal.

All my items are shipped worldwide FREE from Switzerland.

Shipping is by A priority, Registered airmail, signed for delivery, with tracking number or by UPS.

Tracking number as well as tracking website is advised to sellers as soon as shipping is done.

Thank you for your business.

Ship items back to me within: 7 days of delivery

Request a cancellation within: 12 hours of purchase

But please contact me if you have any problems with your order.

The following items can't be returned or exchanged

Because of the nature of these items, unless they arrive damaged or defective, I can't accept returns for:

Questions about your order?

Please contact me if you have any problems with your order.

Special!
My selling principle is:

I am ready to refund in totality any item sold by me if you are not fully satisfied with your purchase;

NO QUESTIONS ASKED - NO CONDITIONS

Please do not hesitate to let me know your special requests.

0 items in your cart